The third Aireys Festival of Words was a dynamic weekend of great literature, poetry, art, sculpture and music.

We feel enormously privileged to live in such a beautiful township, and we were extremely proud to have attracted more than 30 of Australia’s best known and emerging authors and poets to our small coastal village. All authors gave incredibly generously of their time with special readings, addresses, conversations and workshops.

Over the weekend of 14 – 16 August 2009, we had over 3000 people attending the festival, which is a stunning testament to not only how much we love literature here in Aireys, but what a wonderful township it truly is.

Great Escape Books was relocated in spirit up to the Community Centre and operated as the hub of book sales and signings. A sculptural trail by Darren Matthews linked all events and venues throughout the townships of Aireys Inlet and Fairhaven. 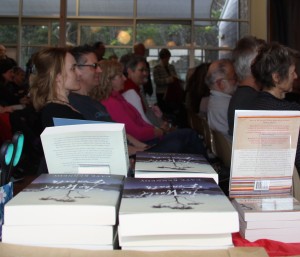 Festival Launch: The official launch was by great Australian poet and novelist Cate Kennedy, who read from her new novel, The World Beneath. Local troupe Anglesea Performing Arts also appeared with the stunning and confronting play on words, ‘Self Accusations’.

With the Community Centre transformed into an epicentre of literature and over 250 people in attendance, it was an inspiring literary evening. Great local music at the Aireys Inlet Hotel with Aireys Live extended the opening festivities far into the night.

Children’s Hub: We were delighted to have two of Australia’s most beloved author-artists, Alison Lester and Robert Ingpen appear in our Children’s Hub. Youngsters were held spellbound by the details and images behind Alison’s well-known stories such as The Quicksand Pony and Are We there Yet?

While Robert delighted young and older members of the audience as he read from his classic edition of the Wind in the Willows. Local school children appearing as ‘Hairy Peruvians’ were enchanting as characters from his beloved story The Voyage of the Poppykettle. With over 250 children and their parents in attendance, both authors had the audience completely captivated.

Teen Space: Chrissie Keighery and Hardie Grant editor Hilary Rogers entertained young adult readers and parents with genuine tales of what it is like to be a teen today with Outside In, while Maureen McCarthy held sway with her reading of the great teen thriller Somebody’s Crying.

Our thanks to Surf Coast Shire Councillor Libby Mears who acted as MC for the Children’s Hub and Teen Space and is always so giving of her time and expertise.

Opening ‘Great Australian Authors: the Journey Within’ on Saturday was Jacinta Halloran who spoke about her heart-rending debut novel Dissection.

Nick Gadd, author of the thriller, Ghostlines, and winner of the Ned Kelly Award for Crime Fiction, spoke about the writing process.

Sonia Orchard read from her lyrically beautiful novel, The Virtuoso and the Sophie Cunningham, author of Geography and more recently, Bird, and long-time editor of the iconic literary journal Meanjin, spoke of her love of writing.

Keynote Literary Evening: The Festival highlight, the Keynote Literary Evening, was packed to the rafters. Our first Keynote speaker, writer and comedian Denise Scott, regaled the audience with not only tales from her latest book, the hilarious All that Happened at No 26, but also with amusing anecdotes from other writers festivals.

Great crime writer Shane Maloney held the crowd in the palm of his hand as he spoke about his character Murray Whelan and political and literary life in Melbourne.

Our thanks to local Surf Coast Councillor Simon Northeast, who nearly stole the show with his hidden comic talent as MC.

Poetry Readings: The ambience of Diamond Heights was the perfect venue for our poetry readings. This session featured work from the Deputy Chair of the Australian Poetry Centre, Robyn Rowland, to Chris Wallace Crabbe, the Professor Emeritus for the Australian Centre, University of Melbourne.

With guest poet John Jenkins and local poets Christos Raskatos, Trudy White and David Campbell, we had a huge breadth of talent reading their wonderful works of poetry.

Surf and Adventure Panel: A favourite with all grommet and surf nuts, this was a terrific session chaired by Marty Maher and featuring great travel and adventure writers Patrick O’Neil, author of Sideways and local Brendan McAloon, author of Deepwater. Both writers spoke of what it was like to come to the edge of physical and mental endurance and then to find the strength to go beyond the barriers.

Foodies Luncheon at a la grecque: Lovers of fine food were in for a double treat with a gourmet lunch at a la grecque enjoyed with guest speaker and chef Allan Campion, author of In the Kitchen, the yearly Foodies Diaries, The Foodies Guide to Melbourne and many other cookbooks. Fine food, great wine and a fascinating event with Allan Campion.

Deborah Forster read from the bleakly beautiful The Book of Emmett, and Rosalie Ham, author of Summer at Mount Hope discussed the darkly quirky novel The Dressmaker, a gripping tale of small town life, love and revenge.

A spellbinding forum that ranged from the intrigues of Australian politics, to the machinations behind decisions taken by countries within the United Nations. It was a truly inspiring and enlightening session.

Our thanks to screenwriter and long time friend, Andrew Knight for his generosity and superb oratory skills in acting as MC for these sessions.

With Special Thanks: Festivals such as the Aireys Festival of Words are truly community events and could not be held without the enthusiasm and support of the people of Aireys Inlet. A special thanks to the Festival committee, the small army of volunteers who gave their time over the Festival weekend, all our wonderful accommodation providers,  and local and government businesses who sponsored the many Festival events.

The Siren and the Sailor