The inaugural 2012 Lighthouse Literary Fest was a huge success with writers and readers alike having a wonderful time. Tickets had sold out well before the weekend began so it was a packed pub that became literary central.

The vibe around the venue and indeed the whole town was really one of a festival – you could really sense the air of energy and enthusiasm. Everyone loved the way that authors were involved in multiple sessions so that you really felt like you got to know them. The relaxed atmosphere of the event contributed to this, with authors making themselves available for one on one chats and book signings after their sessions. The program itself was a fantastic mix of serious literary discussion, performances, inspiring ideas and light hearted fun.

After a series of stimulating and thought provoking workshops the program kicked off with a lively discussion by six panelists about their favourite characters. It was fascinating to hear what these writers considered to be a great character and why, and it was especially entertaining to have the characters brought to life by readings from actors Ailsa Piper, Louise Siverson and Peter Curtain. For those who missed the characters and where they all came from here is the list:

Charlotte Wood – Paul Chowder from The Anthologist by Nicholson Baker

Characters, this time of the more unlikable kind, were also a feature of a Sunday afternoon chat with Chris Womersley, Charlotte Wood and Bob Gott.

Over the weekend eager readers got to meet the women behind four recently released novels with Favel Parrett – shortlisted for the 2012 Miles Franklin Award, Charlotte Wood- longlisted for the 2012 Miles Franklin Award, Paddy O’Reilly and Carrie Tiffany giving great insight into how they work. Audiences also enjoyed hilarious tales from Ailsa Piper of her sin carrying pilgrimage across Spain.

Australia was the focus for two very different sessions – one looking at whether Australianness is a positive or a negative in the world of writing and the other taking four urban writers out of the city and into our wild Aussie landscape.

The power of language and the power of the voice were the focus of two Sunday afternoon sessions. Julian Burnside QC and David Corlett gave many in the audience a sense of hope about the future. While voice artist Ros Oades lightened the mood with her intriguing vocal exploration.

For many the highlight of the weekend was the evocative Saturday night event that explored Silence. “Breathtaking”, “moving” “powerful and “the most innovative thing seen at a literary festival” were just some of the comments passed on. The combination of reading, passionate performance, improvised music from Paul Grabowksy and, of course, silence is something few people present will ever forget.

The feedback from everyone involved from organisers, authors, workshop participants and all Festival goers has been incredible. The word most often used to describe the weekend was ‘inspirational’ and guest author Charlotte Wood declared it “the most enjoyable literary event I’ve ever taken part in”.

“I have thoroughly enjoyed the event. The quality of all participants  –  authors, actors, presenters…was  outstanding.The breadth of the program gave me  the  challenge and stimulation I needed.  As  a  local,  it is wonderful to have such an  event/occasion  come to us.    –    Anonymous feedback  from Anglesea

“All of the panels I attended were very interesting and  engaging,however  the  keynote performance on “Silence” was truly breathtaking.
More stuff  like this”!    –    Anonymous  feedback  from  Aireys Inlet

“Saturday  night  was  extraordinarily  good. I’ve never  seen  anything  as  innovative in  any other literary festivals. The  panel sessions have been first rate, as  I expected  after  ‘Women on  the Road’, and the size of  the festival  means  it’s possible to meet and talk to participants and other visitors. The  calibre of the writers and other artists is first rate–  astonishing  to  have access  to these  people at a regional venue.  I went to all the workshops and each writer  presented   an individual approach to the craft, which complemented  the techniques of  the  other writers. The calibre of participants was  impressively  high too. I’ve   loved every minute of  this festival. I  was  so excited  last  night  I  could hardly  sleep.  The whole thing has been run with great professionalism and    warmth,  typical  of  Nicole and her team.  Fabulous”!!     –    Anonymous feedback from Aireys Inlet 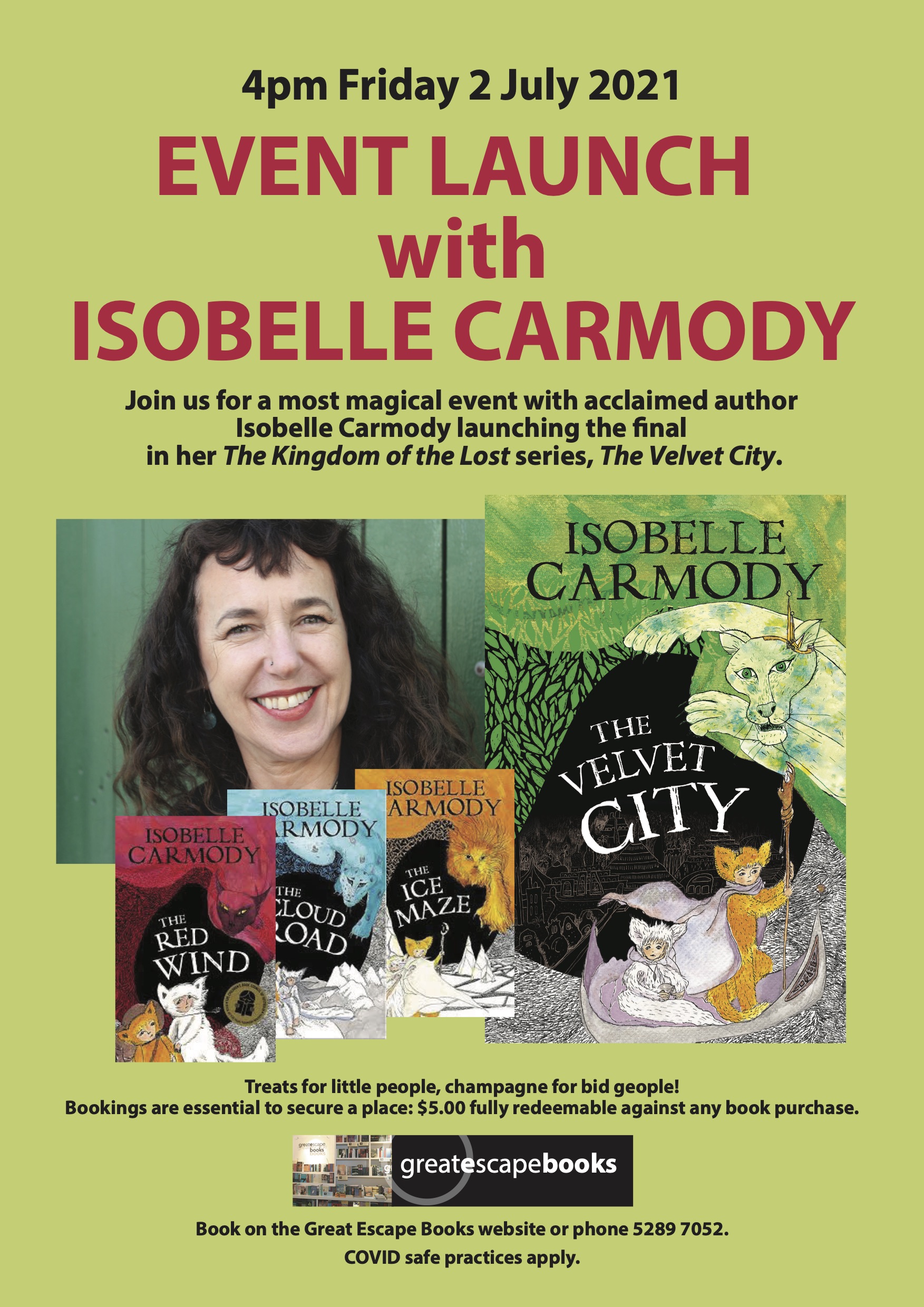 Launch of The Velvet City with Isobelle Carmody – Bookshop Event 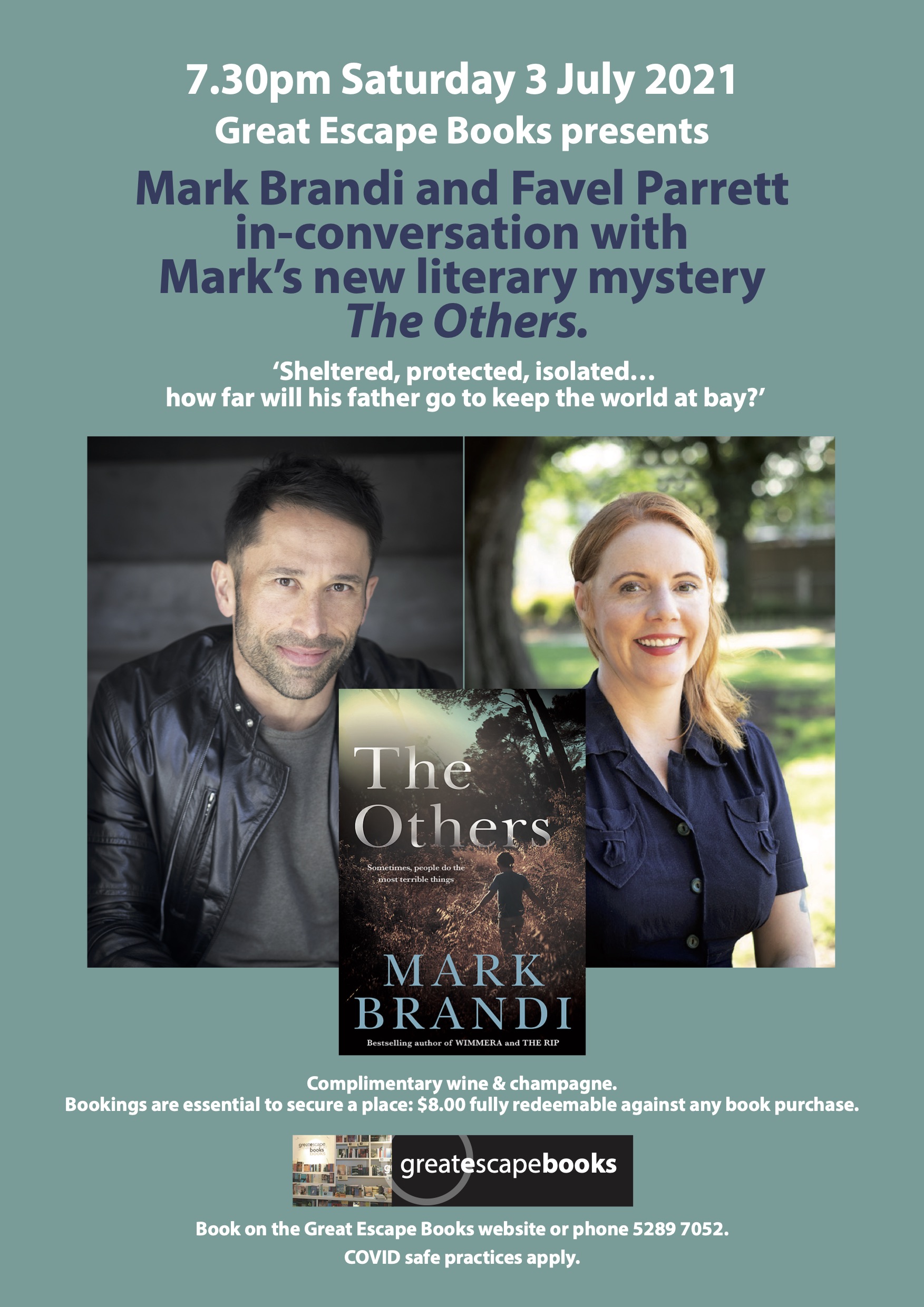 Mark Brandi & Favel Parrett with The Others – Bookshop Event