WOMEN ON THE ROAD WRITERS WEEKEND

There have been some event time changes for the Sunday Panel sessions, so please see attached program guides for the Sunday sessions only, or drop by Great Escape Books for a hard copy. It’s just a few time changes, all events are still running in the original format, just at a slightly different time to fit in with guest speaker’s commitments.

Waiting Lists: We have a significant waiting list for all events that weekend, so if you find you cannot make an event, please call us and we will refund your money and reallocate your ticket.

More Exciting Events: The good news for all who missed out,  is that there are more fabulous literary events planned for this coming year, both large and small, and you will be the very first to hear about it via our loyalty newsletter. The next event is timetabled for this Easter.  More information to follow.

MaryAnne began her producing career in live comedy stage shows and comedy festivals. After crossing over into television, she produced Foxtel’s The Comedy Channel’s entire local slate for two years then worked on a variety of children’s shows for Disney, Nickelodeon and the Seven Network.

In 2004 she took over Channel Seven’s medical drama All Saints for three years after it moved into the ED, before returning to Melbourne to launch and produce the first three series of the police drama City Homicide.

Kate Holden was born in 1972 and went to progressive community schools and the University of Melbourne, where she studied classics and literature. She had various jobs before turning to an unexpected career in heroin addiction and, a little later, as a professional sex worker. She quit both by the time  she turned thirty and after living in Rome for a year, and teaching English in Shanghai for several months, got a diploma in Professional Writing and Editing from RMIT, where she  started working on a draft of a memoir.

In My Skin: A memoir (Text Publishing), was first published in 2005 to critical acclaim and sold to ten countries. Kate has also written a popular column for The Age for several years as well as widely published essays, short stories, and literary criticism. Her second book The Romantic was released in 2010.

Judy Horacek is a cartoonist, writer and artist who believed humour is a fantastic way of trying to change the world.  Her cartoons can be found on fridges and toilet doors throughout the world, and she has had seven collections of her cartoon work published, the most recent of which is If You Can’t Stand the Heat (Scribe 2010).

With Mem Fox she co-created the instant children’s classic Where is the Green Sheep? (Penguin) and has since created four other picture books on her own, including The Story of Growl (Penguin 2007) and Yellow is My Favourite Colour (Penguin 2010)

Toni Jordan’s debut novel, the international best-seller Addition, was published in 2008 and shortlisted for both the Barbara Jefferis award and the ABIA best general fiction book, longlisted for the Miles Franklin Literary Award and won best debut fiction in the 2008 Indie awards. Addition was published in 16 countries.

Her second novel, Fall Girl, was published in November 2010 in Australia and will be published next year in the UK, Germany, France and Taiwan. Toni teaches Novel at RMIT University and writes a weekly column in The Age. Her work has appeared in the Sydney Morning Herald, the Herald Sun and The Monthly.

Cate Kennedy is the author of the short story collection Dark Roots and the novel The World Beneath, as well as two poetry collections and a memoir Sing and Don’t Cry; a Mexican journal.

Her fiction and non-fiction has appeared in many journals and anthologies, everywhere from the Big Issue to the New Yorker and this year she edited Black Inc’s Best Australian Stories collection.  The World Beneath was the winner of the People’s Choice Award in the 2010 NSW Premier’s Literary Awards, and was shortlisted for the Australian Literature Society Gold Medal and The Age Book of the Year.

She is a popular tutor of writing workshops, especially in the short story form, and lives in north east Victoria.

Her latest project is Re-Enchantment, an interactive documentary about the hidden meanings of fairy tales, to be launched at the Adelaide Film Festival and on ABC On-Line and ABC TV in March 2011.See the trailer at http://www.abc.net.au/tv/re-enchantment/

Alice is a Melbourne writer, editor and lawyer. Her first novel, Unpolished Gem (Black Inc. 2006) became the bestselling book at the Melbourne Writer’s Festival, won the Australian Book Industry Award’s Newcomer of the Year Award in 2007, and was short-listed for numerous other state and national awards. Alice is a frequent contributor to The Monthly, The Age and The Australian , The Good Weekend,  and has been published in Meanjin, Griffith Review, and The Best Australian Stories 2008.

Alice was the Asialink literature resident to Peking University in 2008, and the Australian representative at the Iowa International Writer’s Program in 2009. Alice has been the Writer in Residence at Ormond College and the Artist in Residence at Janet Clarke Hall (2011). She was also a Walkley Awards Book of the Year Judge in 2010.

Hannie Rayson is the author of thirteen plays. She has an established reputation for topical, complex dramas, one of which was described warmly by columnist, Andrew Bolt as “a smug vomit of hate”. She is also quite funny. Her plays include Hotel Sorrento, Falling From Grace, Life After George, Scenes From A Separation (co-written with Andrew Bovell), Inheritance, Two Brothers, The Glass Soldier and The Swimming Club.

She has been performed throughout Australia at all the major theatre companies. Internationally her plays have been staged in London’s West End, The New National Theatre of Tokyo, The New Kobe Oriental Hall, Japan. Helsinki City Theatre, The Centaur in Montreal, The National Theatre of Slovenia and many theatres in the UK, Europe and New Zealand.

Over her extensive career she has been awarded two Australian Writers’ Guild Awards, four Helpmann Awards, two NSW Premier’s Literary Awards and a Victorian Premier’s Literary Award, as well as The Age Performing Arts Award and The Sidney Myer Award. She has been short-listed twice for the prestigious Melbourne Prize for Literature and she is the only playwright to be short-listed for The Miles Franklin Award for a play.

Hannie has also written for newspapers, radio, TV and film. She lives in Melbourne with her husband, historian and broadcaster, Michael Cathcart.

Amanda Smith is the presenter of Artworks on ABC Radio National. She trained as a ballet dancer, but eventually realised she was more suited to being a professional talker than a professional fairy.

Before joining the ABC in 1991, Amanda spent 10 years working as an arts administrator. During this time, she served on the board of Chamber Made Opera, and the Victorian Council of the Arts.

Amanda is a graduate of the Dance School of the Victorian College of the Arts. She has a degree in Classics and a graduate diploma in Australian Studies from the University of Melbourne.

At the ABC, Amanda produced various arts programs for Radio National and Radio Australia before initiating The Sports Factor on RN. She presented The Sports Factor from its inception in 1995 until 2002, forging a whole new approach to sports broadcasting.

Rachel adapted and directed the feature film,  Beautiful Kate, which premiered at the Sydney International Film Festival and was nominated for 10 AFI Awards including Best Direction.

Her other directing credits include  Blindman’s Bluff , Heart Attack as part of Channel 9’s Twisted Tales and episodes of the ABC’s My Place & Rake. 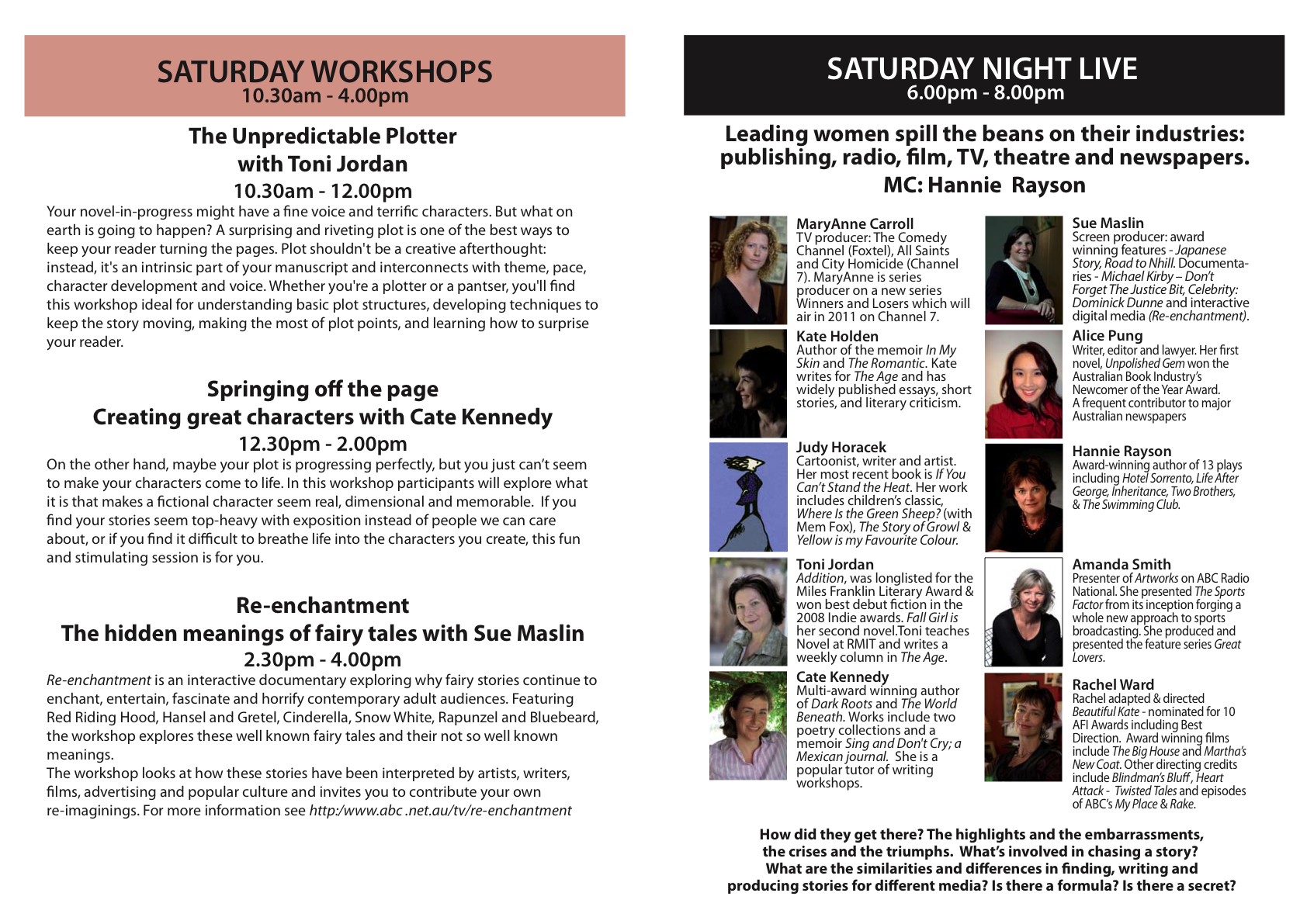 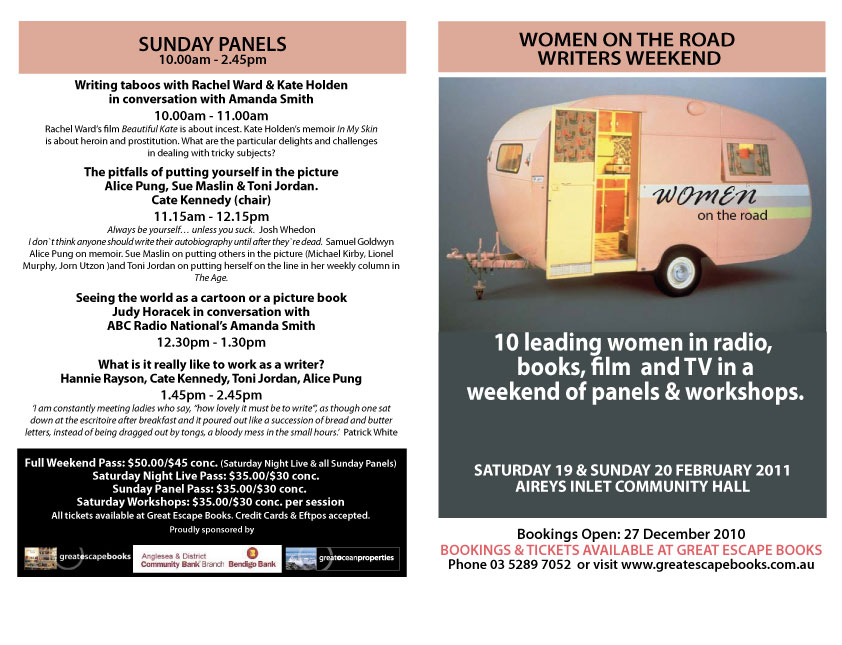